As an introduction, read our blog article on Protecting Internet-facing Systems.

As an exercise in real-life observation of how adam:ONE® Zero Trust Network Access for egress control can protect vulnerable systems, we decided to setup an unpatched Exchange Server 2019 that is vulnerable to ProxyLogon. This post is to offer the design and technical details as well as the outcome of remaining online with a known vulnerability that is only a matter of time before it is discovered and then attacked. 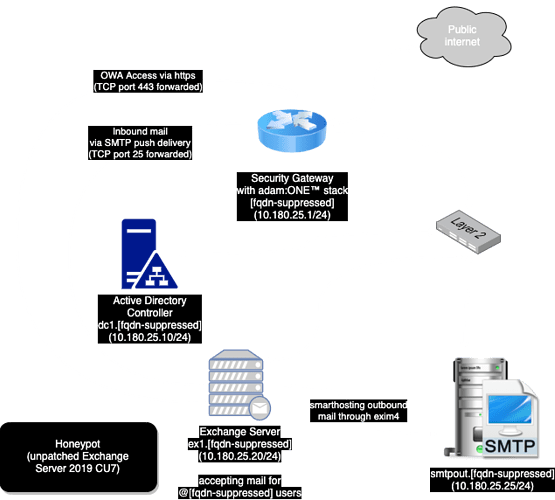 With that basic setup, we tested to make sure that Exchange 2019 CU7 as deployed is, in fact, ProxyLogon vulnerable via this script:

With that script handy, we ran the following:

and received the following:

From the time Exchange was visible from the public internet via HTTPS and SMTP, it was less than an hour that it was scanned for vulnerabilities.

Since then, there are many events per hour from known-malicious IPs to connect over TCP port 443.

The most notable event so far has been a failed attempt by an attacker at a script to utilize burpcollaborator.net. However, since DNS services aren’t available except via adam:ONE® on the gateway, the Exchange Server continues to function without disruption. We’re often asked, how do you prevent other DNS from being used? Here’s how:

Malicious actors ultimately rely on their attack code being able to reach outbound, and may use TCP port 80, 443, 8080, 8443 as well, but any/all ports and destinations are denied until the destination is resolved by an allowed query via adam:ONE®. DTTS® is also the mechanism that prevents TOR or any other obfuscation protocols from reaching out. This is how all C2 is prevented.

Feel free to return here as this post will be updated continuously.