What is Private Relay?

At WWDC21, Apple announced a neat new feature called Private Relay. Twitter lit up and called it a VPN, but that’s not what it is at all. In fact, it behaves more like an application-specific TOR (The Onion Router).

We are thrilled that Apple is privacy focused, where we’ve lived for a number of years already. Naturally, we wanted to do a deep dive on it, so here we are:

How does it work?

Private Relay is intended to operate in two layers.

This two-layer connection has these interesting results:

So on the surface, this seems pretty neat, and we’re thrilled about Apple’s push for privacy. However, there are some artifacts as a result of this behaviour:

Apple is always careful to introduce solid building blocks, so limiting it to iOS Safari for now is understandable. So it is important to understand that:

The power of modern tracking technology is so extensive that your IP address matters less than it used to. Modern tech that powers location-specific services discounts your IP address in most cases these days.

For individuals on iOS devices that had absolutely no other protection before, Private Relay is an immediate win. It obfuscates your IP address and slows you down a little.

However, for those that do have systems in place to protect their own devices from reaching out to trackers and ad networks and phishing links and malware, this Private Relay can be turned off completely on your iCloud+ account, or on a per-network basis. If you previously had proactive privacy/security managed through a gateway and make no changes, this will be the result:

How to prevent Private Relay from connecting, even if iOS has it enabled

These steps are for an adam:ONE® gateway.

In our testing, we tried two methods of blocking: 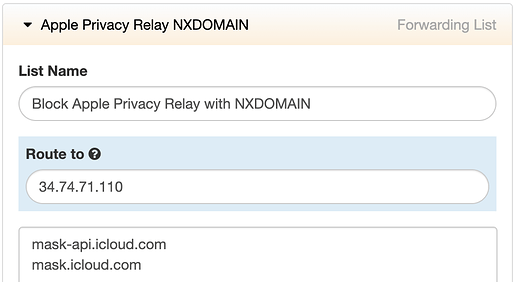 ADAMnetworks’ DNS server at 34.74.71.110 will respond with NXDOMAIN on all queries. With that Forwarding rule created and enabled, iOS immediately pushes a notification to let you know that Private Relay isn’t working right now but will resume automatically. When it can, obviously.

When Private Relay is enabled, as soon as the device leaves a network that isn’t blocking Private Relay, it will reconnect.

For adam:ONE® and adam:GO™ managed clients, this mitigation step will be done automatically prior to iOS15 public release, without any action required on our clients’ part.

Since the original posting, Apple has released the following support article for network system’s administrators:

iCloud Private Relay is a new internet privacy service built into iCloud that allows users to connect to and browse the web more privately and securely.

For environments that wish to disable Private Relay at the network layer, Apple recommends DNS-based filtering on these two domains:

Accordingly, our clients can subscribe to a special rule here which will offer NXDOMAIN responses to queries to the above two domains.

After subscribing to the rule, make sure it is enabled on all of your policies like this: