In most pfSense® cases, unbound is used as a default DHCP server, which has great integration into local DNS as per the feature Register DHCP leases in the DNS Resolver. Unbound also automatically offers PTR DNS records for reverse DNS services. Many gateway and endpoint applications query PTR records regulary. In their absence, such applications perform sluggishly.

When also running adam:ONE® on the same gateway, these are the recommended best practices. This is what is deployed at new and renewed managed locations:

Under Firewall → Virtual IPs → Add an IP Alias to interface Localhost like this:

Restart both unbound and anmuscle services for proper service bindings.

This step is optional, but if you want to retain elegant DNS functionality for internal devices that may have static DNS set to a public IP such as 1.1.1.1, there’s a way to offer the endpoints compatibility by forcing local DNS usage with two NAT hijacking rules like this: 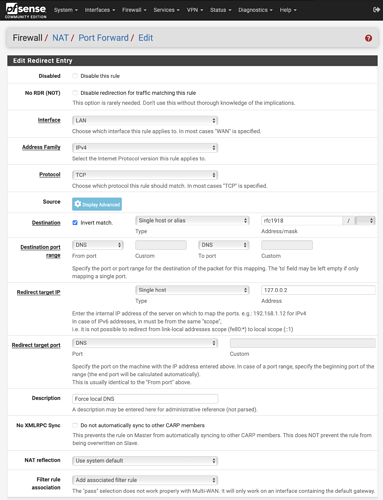 The same rule can be copied, and just change Protocol of TCP to UDP so you end up with two hijacking rules like this:

NOTE: Instead of applying the DNS hijack NAT rule to destination !rfc1918, an even better option is !This Firewall so that even if DNS/AD is in another network segment, it is forced to adam:ONE® instead.

Finally, you want to make sure that adam:ONE® consults unbound for your local domain and PTR records by navigating to dashboard.adamnet.works → Rules → New List, create a new Forwarding List called Local domains and PTRs: 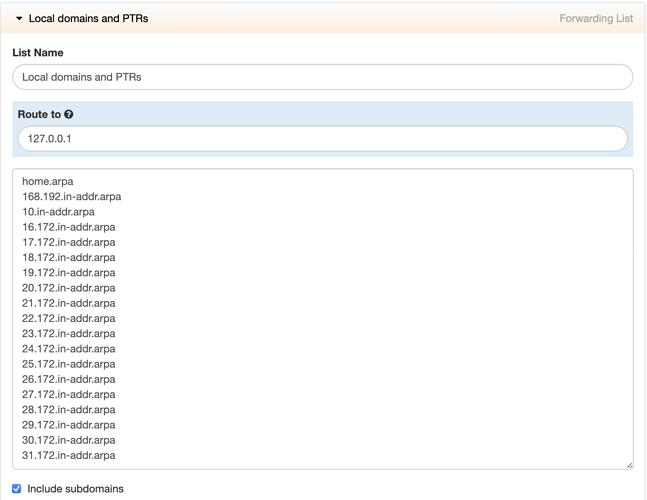 Adjust your list accordingly by replacing home.arpa with the domain you used and/or the domain suffix you offer via your DHCP server’s Domain option. The reason you still want to include all rfc1918 reverse DNS zones, however, is to prevent PTR record lookup leakage outside your network, so ensure that all of these are included:

That will enable tight integration between adam:ONE® and unbound, making use of the DHCP automatic forward and reverse DNS names (PTR records) for local network device names.